Happy New Year, everyone! The Big Day is getting closer, and we wanted to remind you all of the various fun opportunities you have here in DC. If you haven't yet, check out the What To Do in DC page for some off-the-beaten-path ideas, and our handy guide to the Metro system.

We have two organized tours available for our guests: the Library of Congress (Friday at 1) and the Pentagon (Friday at 3). Both require pre-registration because of building security. Both are really cool places with interesting histories and neat exhibits, and they're not places most people can usually visit when they tour DC. More information on these tours is included on the What To Do In DC page, and yes, the Library of Congress tour will finish in time for you to get to the Pentagon tour. If you want to attend either or both of these tours, please email bride@jayandleanne.com NO LATER THAN Monday 9 January at 5 PM Eastern. I have to turn in the security rosters the next day.

Those planning to use Metro during their stay may wish to purchase a farecard in advance from Metro's website. I recommend the SmarTrip cards, especially if you are using the MetroBus system to/from Dulles or BWI Airports. They cost a couple bucks to purchase, but every ride is $0.25 cheaper than with a paper farecard. They are also the only form of payment accepted on most MetroBuses, including those running to the outlying airports.

The Metro website also has a nifty Trip Planner that will allow you to figure out your travel plan in advance, including the fare at your particular arrival time.
Posted by Jay and Leanne at 10:45 AM No comments:

Jay and I had a wonderful holiday season. We got to visit both of our families' homes, probably for the last time before we move abroad, and it was really nice to see everyone together and get to relax in the company of our loved ones. We also ate far too much, but I think that's true for just about everyone around this time of year. We went lightly on gifts this year - the Christmas spirit was slow to arrive in our house thanks to all the wedding preparations. We made our traditional contributions to our aunts' and uncles' local food banks, we bought a few small things for each of our parents and siblings, but that was about it. I did find time to cross-stitch a Siamese cat for Jay's Grandma Ann, though, so that was a nice touch.

That didn't stop most of our friends and relatives from going overboard on gifts for us, though. We got some great gifts from our registries, like a small weekender suitcase from the Powners and a new digital camera from the Littles. (I think Mary K got us that just so we don't have that excuse for not sending her photos regularly any more. LOL) We also got some lovely little 'berry bowls' - small side-dish bowls - to go with our white everyday china and a bunch of useful kitchen gadgetry like a julienne peeler (thanks, Aunt Lisa!) and a long bread knife.

During the holiday festivities, one of our relatives asked us a very good question. Since we're moving so soon, she asked, did we want gifts or money for wedding presents? She figured we'd prefer money because we'll need to replace some things when we get to England. That's perfectly true, but the things that we'll need to replace are things that we *need* and are willing to spend money on. The things on our registries, on the other hand, are things that we'd *like*, but don't need. We're both reluctant to spend on wants rather than needs.

So please, consider getting us something off one of the registries rather than giving us money. Give us things we won't - or won't easily - buy for ourselves. Crystal stemware? Why do we need crystal stemware? We already have glass stemware... but it's a mismatched set of just a few pieces that are starting to show their age... and it would be nice to have pretty stuff for when we entertain.... but we don't need it.... You can see how this goes. Even if you have a tight budget, one piece of stemware is relatively inexpensive. And you might feel awkward buying only one, but don't. You got us one, and someone else got us one, and a couple other people got us two, and now we have a set. And even if no one else gives us that, having one gives us a reason to spend some of the gift cards we're getting to complete a set. :-)

Macy's is hosting their annual 'Friends and Family' sale beginning today, Weds 30 November, through Monday 5 December. The code "MACYSFF" gets you an additional 25% off virtually all items, including things that are usually excluded from sales like Lenox and sale and clearance items.

We are registered at Macy's for a number of things, including everyday dinnerware (their Hotel Collection) and fine china -- all of which are on sale this week. Someone asked about our wish list for china. Since we're moving abroad, we don't want to take a lot of stuff. Our biggest wish for the china is the accent plates, which pair really nicely with the plain white Hotel china and our usual fabric napkins to dress up a table without needing to tote a complete second set of china. Our next wishes after that are the creamer and sugar bowls, the accent mugs (note: NOT the mugs that macys.com shows - see below), the teapot, and the serving bowl and platter.

If you'd prefer not to shop online, you can contact Patty Saks, our registry guru, at 703-412-8305 or patricia.j.saks@macys.com, and she can help you get the discount. If you'd like to gift the accent mugs, you should contact Patty - she can give you a hand on that - or order directly from Lenox.com via our Amazon.com registry. Lenox's usual prices are around Macy's sale prices, and shipping is pretty reasonable (and free over a certain amount).
Posted by Jay and Leanne at 8:52 AM No comments:

Well, we finally found out where Jay is getting posted! He'll be posted to Menwith Hill, in the northern part of England, in early February. It's about 20 minutes from Leeds, near the town of Harrogate. Harrogate is a former spa town, with mineral springs and lots of fancy Victorian architecture. We're looking forward to it. It will be a big change, and a big move, and right now we're still waiting for a lot more information. We don't know, for example, exactly what he'll be doing, or how long we'll be over there.

The good news is, Leanne will be able to work while we're there. What kind of work, we don't know yet, but there's a Department of Defense elementary and high school on the base, so subbing will be a possibility. We will likely have a house rather than an apartment. Many people have already offered to come to visit. :-) And air travel within Europe is extremely cheap, so we'll be able to do a lot of traveling and sight-seeing. And as with all PCS ('Permanent Change of Station") moves, the military pays for movers to pack all your household goods, so we won't have to do that on our own.

The bad news is, we have to move out of the country just a couple weeks after the wedding. That's going to be a significant amount of chaos, even with the military doing the packing. The worst part of moving there, though, is that we'll have to put a lot of things in storage. We can take the car and both bedroom sets, but we're still going to be limited in what else we can take. We're already trying to figure out what electronic gadgets we'll take, what we'll replace over there, and what we'll do without for several years. Electricity is different there, as are plug shapes, and while some of our electronics include converters (or can work on converters and/or adapters), we're not going to be able to take most of our favorite kitchen gadgets. (The KitchenAid stand mixer will definitely get replaced; it's an essential to us already. And the KitchenAid folks say that all the attachments will work on an American or European machine.) :-) Plus, houses are typically smaller, and built-in closets are apparently pretty rare.

We'll manage, of course; we both always do. We'll continue to keep you updated via this blog (which I will update more frequently, I promise!!) as we learn more.
Posted by Jay and Leanne at 9:39 AM No comments:

As you all know, Jay Little and I planned to marry next May here in the Washington, DC, area. Alas, the Air Force has other plans. As an active-duty officer, Jay typically moves every 4 years to a new post - by his calculations, we expected to move next June. We learned last week that we will be moving sooner, most likely between February and April. So, to simplify things, we decided to move the wedding up to before we'd expect to move. The new wedding date is Saturday, 14 January 2012.

The wedding will still be here in the Washington/Arlington area. We do still intend a morning ceremony (10:30 AM), so you will probably want to arrive on Friday. We will have hotel and other information up soon, and formal invites will go out around mid-November. We also anticipate a shower or similar event in early November in Ambridge as well.

Because we're on a tight(er) time line now, I'm working hard to get the guest list complete. If we don't have your current address, or you even think we might not have it (you've moved in the last year or two? you've never gotten a Christmas card from me?), please drop me a line to confirm it. And of course, please let your significant others, relevant children or parents, etc., know of the change in date. I've gotten everyone from the guest list that I or Facebook have an email
address for, but I know I haven't gotten everyone.

Much love to all of you - we hope to see you there!

We are happy to announce that we are engaged! Our current plans are for the wedding to take place in the Washington, DC area on 19 May, 2012. 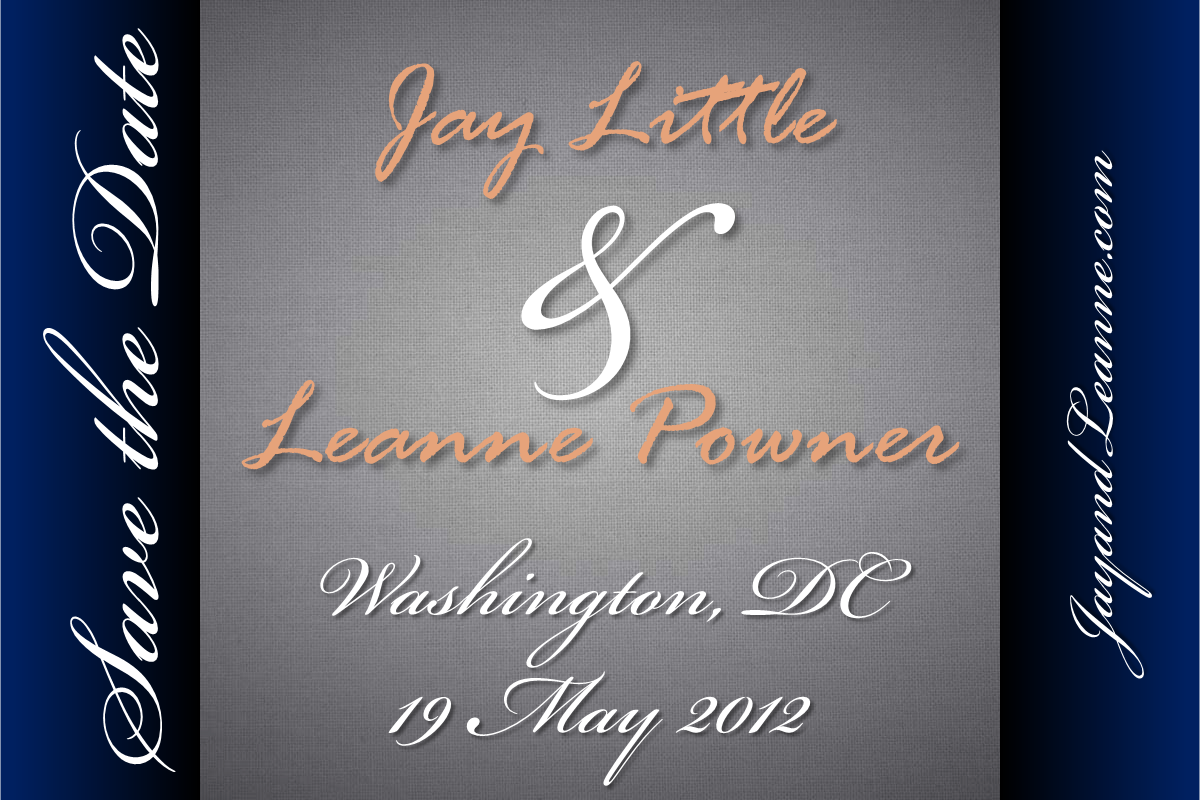 Click the image for a full-size version.
Posted by Jay and Leanne at 8:00 PM 2 comments: